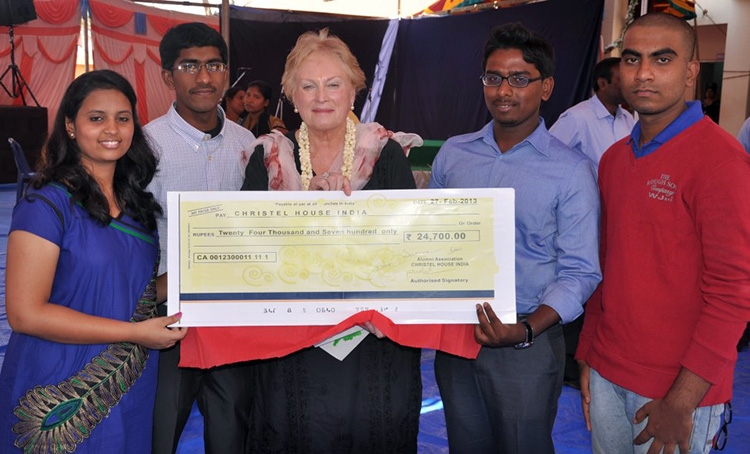 “To Care, To Share, To Make a Difference.” Christel House India students have recited this mantra for many years, and in February 2013, a group of our graduates put these words into action by presenting Christel House Founder and CEO, Christel DeHaan, with a check to Christel House representing donations from their earnings.

The idea was generated by a group of graduates who are now management trainees for Transguard Securities in Dubai. They organized other working graduates so their contributions could be presented during the school’s 2013 graduation ceremony to set an example for their younger classmates.

Soundharya (at left) began attending Christel House India in 2003. Her father was a construction worker and her mother worked as a sales clerk—both barely made ends meet. Fighting the odds, Soundharya studied at and graduated from Christel House India. After high school, she was hired on for a two-year apprenticeship training program at The Taj Hotel, a prestigious hotel in Bangalore. Despite finding the apprenticeship program extremely difficult, she persisted and was even offered a full-time job at The Taj Hotel on MG Road, one of the Taj Group’s most prestigious properties. Soundharya‘s salary is a great support to her family and, because of it, her younger sister can now go to college.

But supporting her family was not enough for Soundharya. She wanted to do more. In February, she and a group of her former classmates pooled their resources and presented a check to Christel House Founder, Christel DeHaan, as a donation to Christel House. The students presented their donation during the school’s 2013 graduation ceremony to set an example for their younger classmates. The check was worth 24,700 Rupees—about $450 USD—a huge sum for these students.

When Christel DeHaan received the check, she was brought to tears by the students’ generosity and spirit of giving.

They are living proof that Christel House values are taking root, and bearing fruit.

Be part of it. Support Christel House today.